The area among the Old Tower to walk Crane was formerly known as the Aguda, a fishing neighborhood whose nucleus was the Puerto Chico, disappeared after the fillings, and the Chapel of Santa Ana, from the XVIII-Century. The Crane Walk began in the late XVIII-Century as towpath. The Promenade of the Boat, The Boat´s House and the stone cylinders for warping belong to the same time. Halfway through the ride is La Fuentina, which means small fountain in Spanish. The iconography carved in stone reproduces a mythological Xana (Asturian fairy) and two bears in homage to " La Fonte del Cay " literary work dedicated to Pepin Pria, from Ribadesella in 1927. In this area some explanatory represent the Asturian- Mythology, located in six different murals. They are designed by cartoonist Antonio Mingote, collecting historic events regarding Ribasedella and its port. At the end of the walk there is a wide Barbican built around 1830, whose function was to assist ships entering the port. Climbing up a path that starts at the same place , you get to the Shrine of Our Lady of Guia , a Renaissance chapel of the late XVI-Century. Lady Guía is the patron saint of sailors . The building lacks a ship, probably lost in a landslide, and the best preserved element is the cover gorgeous south, in which the original stonework can still be seen. It stands on the mound Corveru, held from the XVII-XIX-Century, next to the chapel, there is a fortification with a battery for the defense of the harbor. The three guns that are today located there are part of the history from Ribadesella. They were thrown into the sea by the French army in their retreat from the town, in the Revolutionary War and returned to its original site in 1999. Ermita and drums are now the best vantage point to watch the town, the river, the mountains, the beach, the cliffs and the Cantabrian Sea. 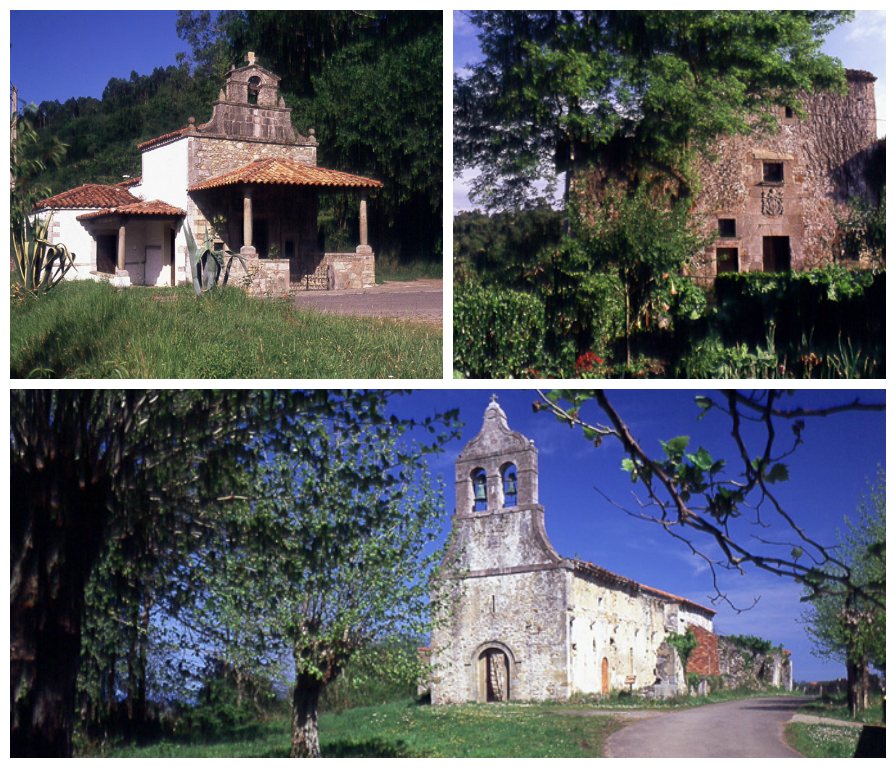 Modernism is an excellent example in the Hotel Marina, 1912, and the rationalism of the 30s is well expressed in the Fish Market, well ventilated and lighted. It was designed by the city architect Manuel García and inaugurated in 1936.

On the beach there are excellent examples of modernist mansions or regional air lifted in the early twentieth century by the colony of holidaymakers from the upper classes, which demonstrate Ribadesella pioneering role in tourism along with the Spanish North Coast, such as the destinations Santander and San Sebastián . The most emblematic are the Chalet de la Marquesa de Argüelles , designed in 1904 by Juan Alvarez de Mendoza as a hotel in 1963 and Villa Rosario , designed by local architect José Quesada Espulgas in 1914 and converted into a hotel today. A notable architect, Miguel García- Lomas Somoano, designed some of the best beach chalets, such as Miguel Llano, Uria Aza, Ignacio Herrero and Pedro Pidal, while Juan Miguel and Enrique Pfitz Guard designed respectively Villa Verde and the Piñán palace, used today as a youth hostel.

On a walk around the Council, from the right bank of the Sella the church of Santa María de Junco, is situated in the oldest area and it belongs to the village of Xuncu . It is a small rural church from Late Romanesque, built in the early XIII-Century and renovated in the XVII-XVIII-Centuries. There are some modifications of holes and the addition in 1553 of the Coat of Arms Ruiz de Junco, family councilor of this church. It was destroyed in 1936 and restored in the eighties. It has a single nave, now flat dome and an apse with an arrow slit window with original corbels and decorated. Inside there remains partially hidden by ancient reforms gotizantes paintings, and a double triumphal arch, decorated with scrolls recorded and supported by capitals of great originality representing heads of monsters, a human head and several pairs of birds pecking leaves a recurring theme in the window of the apse and in the church of San Esteban de Leces. 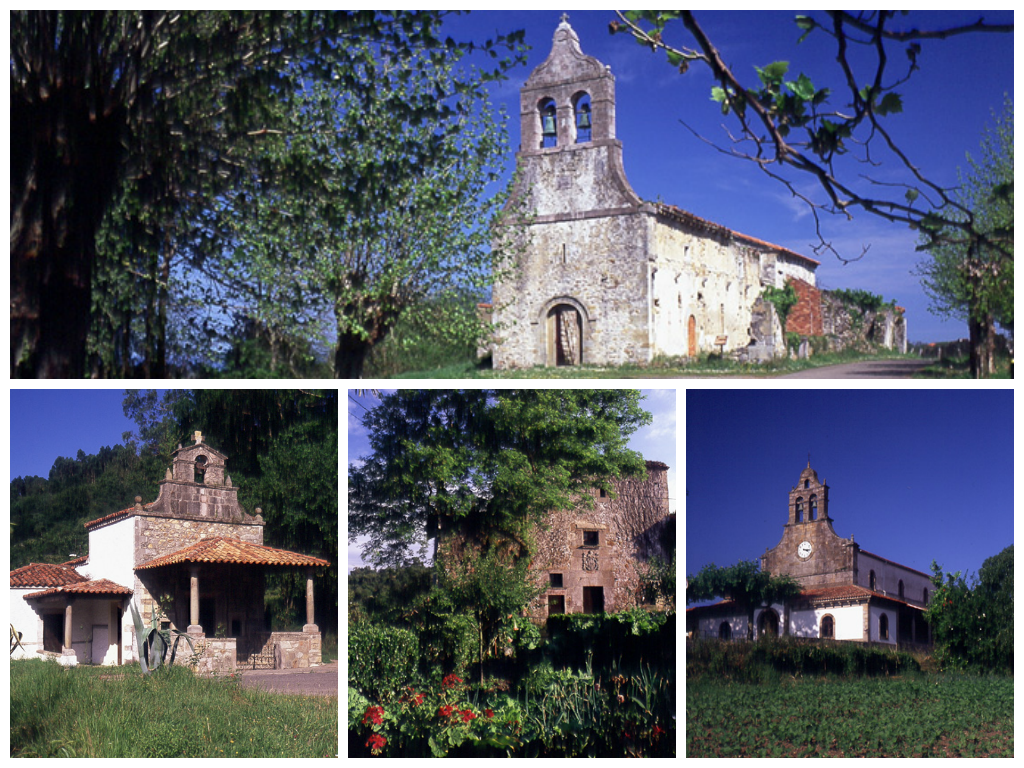 Near this church, and without leaving the village of Xuncu, it is situated the Tower of Junco, probably the oldest civil council building, built in the XV-Century as a defensive stronghold, but was inhabited until early XXI-Century. Above the entrance, solid segments, there is a coat of Junco Ruiz family. Closer to the Sella river, is located the Palace and its adjoining dwellings Piconera, a set built by Manuel Martinez in 1891.

Another sign of the power of Junco´s family was the construction of the Palace Sierramayor, located in Sebreñu. The architectonical style belongs to Renaissance, XVI-Century and was renovated in the XVIII-Century. It has two wings, the oldest work, a style very similar to the stonework of Tatty Prieto Palace, seen in looking to the south. Nearby El Carmen is the House from Fenoyal endowed with Coat of Arms Junco and private chapel, ruined, and road ahead, along the Peña Pagadín, you get to Calabrez with beautiful rural farmhouses scattered in along the mountain.

In Sardeu is located Barreu´s House, from the XVI-Century, in which the municipal corporation from Ribadesella stayed after the elopement of the village during the War of Independence. In Moru, is located the Church of San Salvador, in early times it was the richest parish council. This has Romanesque origin, the apse and the triumphal arch carved corbels preserved, although the temple underwent considerable expansion and reform in XVI-XVII-centuries, period to which the remains of paintings behind the main shrine possibly belonged. The paintings that cover the walls are being restored.

The Tower Ruiz de Junco located in the village of San Esteban de Leces belongs also to his family. It  is another huge defensive tower adorned with the family coat of arms. The facade was reformed in the XVI-Century with a good ashlar, a gateway arch with lintel and similar kind of windows from Prieto Tattyßs palace. In this  place, next to the tower, is situated the Church of San Esteban de Leces. The church originally Romanesque was similar to the Juncu one. Unfortunately it was destroyed in 1936. Nowadays only the dome parts of it remains such as the corbels of the apse and the loophole window. This Church was the head of an important territory called "Leduas", who joined the "Melorda" (across the Sella) in order to establish the administrative district council in 1270. In Abeu near San Esteban de Leces, is the Palace of Argüelles, although its original site was in Caravia, which had to be dismantled stone by stone due to the negative impact of the landscape because of the mining industry in the territory.

In Torre, Montoto Palace is the most important tourist resource, rebuilt in the XIX-Century on an old medieval fortress high on a big rock. In medieval documents it was called "Felgarias Tower", which gave rise to the present name of this village. In Linares there are two monuments worthy of mention, Galmés Palace, a magnificent example of northern architecture around the end of the XIX-Century and the Parish Church, one of the most beautiful of the council with an amazing paved courtyard. Close to the Linares  Palace is located Alea Palace, that dates from the XVI-Century, it is considered a construction somehow modified but it helps us, in order to get an idea of ​​how the rural renaissance really was. In Berbes is situated the old Prayer House, which became in the XVII-Century hospital of poor pilgrims.

On the right side of the Sella we find Collera village , where the Church of San Martin is located. It still retains the factory Gothic chapel with original ribs. The rector House is a very important resource in that village, rebuilt in 1768. Also Colláu´s House with its walled bastions or the Chapel of Piles with a romantic inspiration are very important in the area. Inside the Road Meluerda, we found the Retiro Palace, very similar to Tatty Prieto´s House, both from the XVI-Century, in a  Renaissance style. The Cemetery Chapel belongs to the neoherreriana architecture, in the early XVIII-Century. In Meluerda village there are several old houses of high interest. It is precisely this territory which , joining with Leces , gives rise to the town of Ribadesella. Among all the buildings of the sixteenth and seventeenth centuries the House Manjon is remarkable, retaining the coat of arms, nestled next to San Julián Chapel and a centennial yew as symbol of this village. Continuing  to Camangu, there are still very beautiful houses , like  Tarabuxín´s House, founded in the late XVII-Century and adorned by three magnificent coats of arms on the facade, in addition to a private chapel. In Cuerres , already to the limit of the Town, there are also good examples of this strong rural architecture, as the Covián´s House. Here still remains a beautiful engraved saetera window. San Mames Church, has a beautiful large atrium that gave shelter to the faithful and those who came to San Lorenzo´s Open Market . The annex is a XVIII-Century field source, who was also at the service of those attending this fair , one of the most famous of Asturias from the Middle Age until the early XX-Century.